Corporate philanthropy has been deeply engrained into the culture of CreateAbility Inc. since its inception in 2001. The company, which provides assistive technology to people with Down Syndrome, intellectual disabilities, dementia and traumatic brain injuries. The company donates 10% of its profits to local and worldwide organizations such as Circle City Relief, the Muscular Dystrophy... Corporate philanthropy has been deeply engrained into the culture of CreateAbility Inc. since its inception in 2001. The company, which provides assistive technology to people with Down Syndrome, intellectual disabilities, dementia and traumatic brain injuries. The company donates 10% of its profits to local and worldwide organizations such as Circle City Relief, the Muscular Dystrophy Family Foundation, and Food for the Hungry.

While many companies embody the spirit of corporate philanthropy through company-wide activities such as food and monetary donation drives, community cleanup, Habitat for Humanity, and other charitable initiatives, CreateAbility’s founder, Steve Sutter, decided to do take a different approach in 2019. On May 23rd, National Red Nose Day, employees were given a disclosed amount of money to give to others with only one requirement: that each of us gets to experience giving to causes or situations that directly helped benefit children in poverty. All employees were additionally given one day of PTO to utilize their time and money for the greater good of children within their own communities.

“One of my greatest joys is giving.” Steven Sutter, CEO of CreateAbility Inc. states. “I wanted to share the joy of the giving experience, and this initiative corresponded so well with the purpose of National Red Nose Day.”

This fresh approach to philanthropy resulted in immeasurable benefits for its employees as well as the company. Here is a high-level view of the success of this program and how CreateAbility’s employees felt about it:

It isn’t often that employees of all levels are afforded the opportunity to donate an amount of money that can truly make a difference to someone else. For many, it provided an opportunity to really prioritize the things they felt passionate about. Many chose organizations or initiatives that they had personally been touched by in the past – while others chose by the level of community need. Some donated the entire sum to one initiative; others chose to spread it out over several.

“I was passionate about a lot of potential charities and had difficulty narrowing it down to just a few.” Mitchell Diauto, Web Application Developer at CreateAbility Inc. explained. “This initiative moved me to really dig in to decide what was most important to me and find the agencies and/or organizations that would stretch my dollar the farthest to do the most good for others possible.”

Regardless, the intrinsic value that stemmed from choosing the organization(s) themselves created both a deep sense of satisfaction as well as an increased “buzz” within the company as employees shared their personal stories about their “Day of Giving” with one other.

Increase in Depth and Breadth of Community Philanthropy Knowledge

Larry King, Lead Application & Wearable Sensor Developer at CreateAbility Inc., wasn’t sure where he wanted to donate, but knew that it would involve single mothers in his community as, “New, single mothers have a mountain of challenges to face…and my wife and I have the utmost degree of empathy and respect for the work they have cut out for them. We began our search and found several in our community whose mission was helping these women in critical times.”

As employees’ community knowledge grew, so did the opportunity to continue their journey in philanthropy with these organizations; filling volunteer hours needed to keep the organizations moving.

Unlike traditional corporate philanthropy initiatives, CreateAbility’s initiative encompassed family giving as most of the employees used their time off and funding with the inclusion of their family members. No longer was “Community Day” followed by a dinner table conversation explaining the highlights of the day to family members; it involved them. As family members were included, they too, received all of the warmth and benefits of the act of giving and felt more involved and supportive of the employees’ commitment to the company.

“I think the best part of CreateAbility’s ‘Day of Giving’ was that I got to include my teenage daughter who was able to share in the joy of blessing others with gift cards at our community Goodwill store. It was a literal blast.” Said Kerri Pinger, Marketing & Communications Manager at CreateAbility, Inc. “Seeing her directly experience the value of helping others less fortunate really made an everlasting impression on her. Weeks later, she is still talking about it!”

There is no doubt that corporate philanthropy initiatives host immeasurable value for team building and comradery within an organization. CreateAbility’s “Day of Giving” initiative took a different approach that brought the act of giving down to a very personal level that yielded a higher employee satisfaction rate.

“As we continue to engage in giving to organizations on a company basis, this exploration in personal giving brought equally as much of a morale boost to our employees.” Sutter concludes. “While it requires a little more paperwork than standard corporate giving methods; the end result was well worth the effort and I hope that other CEO’s will take the leap to appreciate and experience the power of personal giving.” Working Smarter, Not Harder, in a Post-Pandemic Employment Landscape 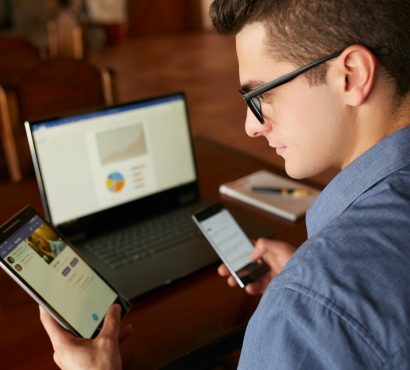 Multitasking as a Care Provider or Job Coach: How Do You Ration Your Time?
Leave a Reply Cancel Reply
Find Us

For more information about how we can customize our solutions to meet your needs, contact:

Already use our solutions? For technical support please contact: